Organizing Aid to His Native Ukraine

Hopelessly preoccupied by the events in his Ukrainian homeland and unable to focus on science, Roman Korol, a Caltech graduate student, has decided to temporarily redirect his energies into collecting humanitarian aid for the citizens of his embattled country.

The 24-year-old theoretical chemist, who completed his undergraduate work at the University of Toronto, is a fourth-year graduate student working in the lab of Caltech professor of chemistry Tom Miller, where his research is focused on modeling the behavior of atoms and molecules in complicated systems. Korol says he fell in love with Caltech "at first sight," during the visiting weekend. "On top of its world-class research, the Caltech community, with members from around the globe, is friendly, supportive and close-knit," he says.

We chatted with him this week, as he and his wife, Karen, a graduate student at the University of Toronto, now on maternity leave—the couple have a 9-week-old son, Danylo—prepared to send their first shipment of donated humanitarian supplies.

Where in Ukraine are you from? Has your hometown seen any fighting?

I'm from the northwest, a town called Lutsk. It's at the corner between Poland and Belarus, about equidistant from each of the two borders. It hasn't seen Russian ground forces yet, but it was hit by several missile strikes.

Is your family still there?

They were until this weekend, when my mom and my two younger siblings crossed the border into Poland. Only women and children are allowed to escape. Ukraine has banned exit of men of fighting age. So, obviously, the male side of my family is all still there. Some of them are fighting.

Did the Russian invasion of Ukraine come as a surprise to you?

Ukrainians would claim that the war with Russia started eight years ago, in 2014, when Russia annexed Crimea, which was an autonomous region in Ukraine, basically, a state in Ukraine. That operation was executed much better than this one. It was bloodless. Crimea was annexed by Russia shortly before I left to do my undergraduate degree. I remember those days; I remember driving with my dad in the car and listening about the annexation announced on the radio and being really shocked and not understanding how it was possible with two neighbors who claim to be of common origin and friendly and neighborly. At the time, most of Ukraine's trade was with Russia. Almost all of Ukraine's eastern business relied on Russia for supply chains and so on.

Throughout the years there were lows and highs, but there has basically been an active war in the east of Ukraine, where the Russians tried to take more and more of Ukraine's territory. Up until last Thursday, they were playing it small. So last Thursday, early in the morning, about 4 or 5 a.m. Ukraine time—6 or 7 p.m. here, Wednesday night—they bombed all of the cities of Ukraine at the same time. They bombed airports and other military targets. The first strike was fully military, no civilian victims.

That was kind of meant to be a devastating blow to the Ukrainian military. It was anticipated; the U.S. had been warning about the invasion for weeks. The Russian forces were mounting, and it was not a secret that Russia was preparing to invade and Ukraine was preparing to defend itself. A few hours before the strike, airplanes were taking to the air, all of the vehicles were moved. So the Russians shot the stations, they shot the airports, but mostly they didn't hit the Ukrainian military infrastructure as much as they thought they would. Which, I think, saved us from annihilation in the first day or two. And then the fighting started.

Where were you when you found out about the invasion?

I was at home. My friend texted me saying Russia attacked. Then I checked the news, and I saw that everybody was talking about it. I don't typically scroll the news, but the first night, I really didn't sleep at all. I stayed up all night and was glued to the news, to Ukrainian, U.S., and Russian sources, just to try and cross-reference.

Were you getting information from your family and friends, too?

I wasn't bugging them that first night. I thought they had more important things to do. When my family called me, they asked me if I knew. I told them obviously I knew.

Now it has a been a full week. I have tried to sit down and concentrate on my work, think about science and think about my thesis that I'm preparing to write, and that just hasn't worked. My thoughts are with Ukraine, and my eyes are glued to the screen looking at updates in the news.

When did you decide to start collecting relief supplies?

I couldn't concentrate on work. My wife said, "You're not effective. You're not going to do work. You're just going to keep scrolling, so let's go and protest. At least you will feel like you're doing something." We decided to go to some protests to support Ukraine. I decided I would go on Friday and Saturday—all of the protests were in Santa Monica, where there is a large Ukrainian community—and then on Sunday I would go to church, pray for Ukraine, and come back and do some work. But I couldn't work. It made me think, "What else can I do from here?"

Logistically, how are you managing this? Do you have people helping you?

I'm collecting items myself and driving them to Glendale, to the office of a company called Meest, a company with Ukrainian roots that sends parcels to Ukraine. It's basically like FedEx. They used to be able to get shipments into Ukraine. But they have stopped sending any personal packages to Ukraine. Instead, what they're doing now is collecting general humanitarian aid from people like me and flying it over to Poland, and then from Poland, it goes on trucks and gets to the Ukrainian border where it's processed by different charities. I have to pay for the shipments, but it is at a discounted rate—just covering their cost of sending the items.

What kind of response have you had from the Caltech community?

A lot of people are very positive and are trying to contribute. The response has been quite overwhelming. One of the problems is we need winter clothes, and you can't really find too much of that in California. So, that's one of the issues. But people are giving their snow boots and snow jackets and other items, and contributing money to help pay for shipping.

The support for Ukraine is overwhelming from what I call all the "free" world. And that is extremely useful. Not just as in useful because we're getting stuff, but useful morally, in terms of keeping our spirit up and letting us know that we're doing the right thing by standing strong and fighting the aggression.

I hope the whole country stays strong and will continue resisting this evil. I did go to church on Sunday—it's a Ukrainian Orthodox Church here in LA—to pray for Ukraine, and one of the parables that the priest mentioned that touched my heart was the story of David and Goliath. It is also the story of the Ukrainian army fighting against the Russian army. Here we have this 10-times-stronger, better-funded, more powerful Goliath and this, at first glance, weak and powerless David. But David is standing strong, and I hope that will continue to be the case.

And obviously, it's not just the Ukrainians who are touched by it. I spoke to many of my friends who are Russian citizens here—Russian students who are Russian citizens. They're also shocked and frustrated. They're powerless to stop this. They are devastated, and it is a major blow for them because of everything that the U.S. is now doing to stop Russia that will indirectly affect them. The U.S. has closed its airspace to Russian aircraft, which I welcome as a means to support Ukraine, but it will also negatively impact these students who might want to go back to Russia to see their family. They will have trouble doing that now.

I'm doing here everything I can, although I have checked plane tickets to Warsaw and thought about going, but having a 2-month-old … it's tough. And once I enter Ukraine, if I were to go there, I wouldn't be able to leave.

Are you planning on doing future shipments?

Absolutely, yes. Even if the war ends today, the consequences of the war will be felt for a long time.

Roman Korol has posted more information about how to contribute to relief efforts on his personal website. 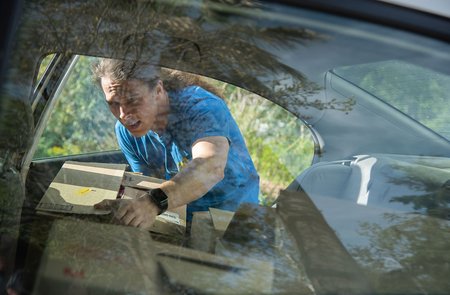 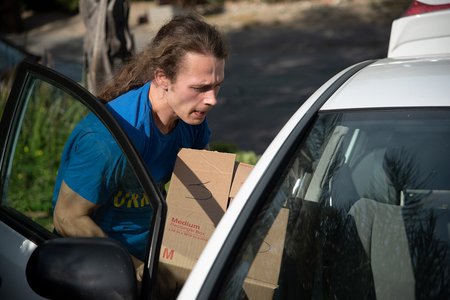 Roman Korol, a theoretical chemistry graduate student in the lab of Tom Miller, is from Lutsk, Ukraine. Credit: Jeremy Fisher for Caltech 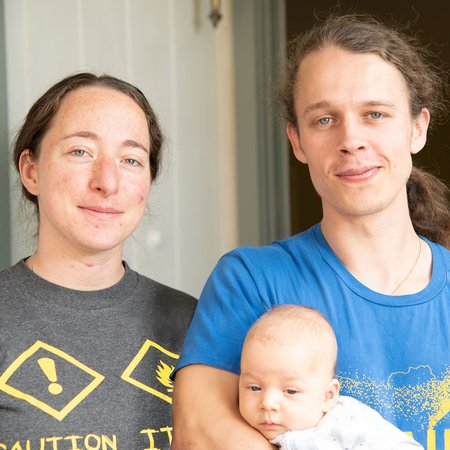 Roman Korol with his wife, Karen Korol, and his infant son, Danylo. "He is my comfort," Roman says of Danylo. Credit: Jeremy Fisher for Caltech
Image Lightbox